I heard from many of you that you enjoyed the transparency and accountability in my last blog post.

My last blog ended with October 3, 2018, so I’m picking up from there to let you know what I’ve been up to on our behalf.

What this won’t show you are the calls I’m having with colleagues about the next session and building a new team, the work I’m doing to build a strategic legislative platform for our district, the efforts to find a physical office location (bless Jen Gallant!), and my part time (and really exciting) midterm election work at MoveOn. It also won’t show you the modest amount of case work I’m doing to help pick up individual advocacy that’s needed in the district.

October 6: My force of nature daughter, Chloe turned TWELVE! We had lots of good weekend time together with my wife Ann and our son, Isaiah.

October 10: Traveled to Boston for a series of meetings at the Massachusetts Law Reform Institute. So glad to do this with Mindy Domb!

October 11: Spoke with representatives from the American Federation of Teachers, NASW, toured the Amherst Survival Center and attended an afternoon meeting and tea and the beloved Tree House!

October 12: Started the day playing ping pong with Bob Flaherty to raise funds for refugee resettlement. I met with the Valley CDC team. And I spoke with a representative from the Gill Montague School District about Chapter 70 funding and the contribution mechanism.

October 14: I spoke at a benefit at Mi Tierra in Hadley for the incredible Movement Voter Project and on a panel about women in the election at Smith College.

October 15: I spent time at the Center for Self Reliance in Greenfield and learned more about the center’s work and the folks who access the center’s services. Ended the night at Pelham’s 275 town meeting.

October 17: I started the day speaking with a disability rights activist. Had a dog walk with Lindsay Sabadosa! Spoke with advocates to end sexual violence and assault. And ended the day at a tour of Service Net’s new building and the Greenfield Town Council meeting.

October 18: I spoke with an expert on the Commonwealth’s foster care and mental health systems.

October 19: I started the day at the Franklin County Resource Network meeting, spoke with the team from Health Care for All, and spoke with Jim McGovern and others at an event for for Question 1.

October 20: Attended an event to mark the one year anniversary of Lucio Perez’s sanctuary at First Church Amherst, organized by PVWC.

October 21: Had breakfast with the women legislators from our region and a special guest!

October 22: Met with representatives of the Environmental League of Massachusetts and attended a Climate Action Now meeting.

October 23: Met with representatives of Trains in the Valley and spoke with Mount Holyoke College students.

October 24: Spoke with a UMass student activist about the cost of text books, met with the UMass Chancellor, and celebrated Hamsphire County Registrar of Deeds Mary Olberding.

October 25: Went to the Amherst Chamber of Commerce breakfast and heard a very uplifting overview of the work ahead from Senator Eric Lesser. I met with advocates who are tremendously concerned about the state seal and mascots that appropriate Native American images and/or enshrine painful stereotypes. I spoke at a fundraiser for the Sojourner Truth School for Social Change and I got to hear our great Attorney General Maura Healey speak. (The picture up top is of me speaking at the Truth School event, with the wonderful Nelson Roman and Cherilyn Strader. And more pictures, below, from that gathering.)

October 26: Went to a meeting of the Massachusetts Municipal Association in Sunderland’s library and celebrated the arts in Massachusetts on #ArtsMatter day!

Ask me questions about any of these meetings or conversations. I’ll be glad to share what I’m learning with you. 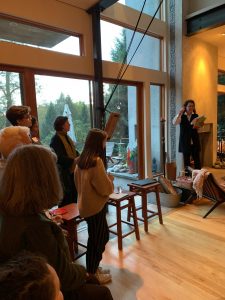 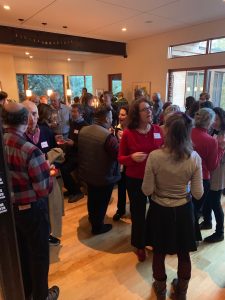 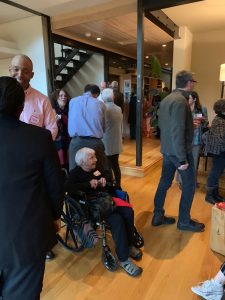 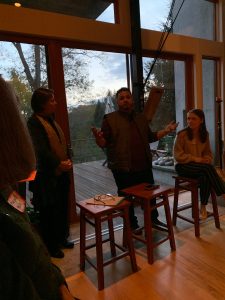 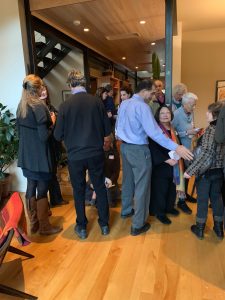 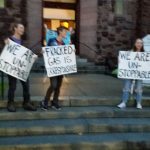 What I’ve been up to since Primary Day!Campaign 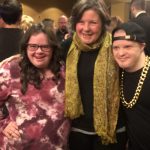