Bob Reich endorsed me for State Senate today. An honor. A high point, for sure. You can read more about it in today’s Daily Hampshire Gazette.

Here are four things (among many) that I love about Bob (and I bet you do as well).

1. Bob never gives up. I don’t need to tell you that these are gut-punch times. Difficult. Overwhelming. But Bob has never faltered. In fact, he’s pressed on even harder after Trump’s win, feeling the urgency we all feel to protect our nation and our communities from Trump’s daily assaults. I’m quoted in a media piece about Bob as saying he’s the most prolific person on the planet. And I think that’s likely an understatement. There are simply no words to describe how tireless an advocate he is.

2. Bob has unmatched faith in the American people and our democracy. Bob tells stories about people approaching him in airports, almost in mid-sentence, asking him what we should do. Over the year’s he’s become a beacon for the progressive community. A light. And he returns the love we feel for him 10 times over. He believes in the American people’s ability to hold government accountable to work in our best interest, which it must. He believes we’ll prevail and that people-power will be the reason.

3. Bob’s our nation’s teacher. I’ve not met someone who’s as much of a natural teacher as Bob. Bob’s classroom is our nation. And he comes to us through his books, his videos, his partnership with many beloved national movements.

4. Bob is a champion of people’s movements across the nation. I’ve never known Bob to turn down a request for support from an allied organization. Day after day he uses his powerful megaphone to lift up critical issues and movement leaders.

I could go on, but you get the idea.

Bob’s a hero. To me. To our nation. And I’m so grateful for his endorsement, which appears below:

I am delighted to offer my support to Jo Comerford in her campaign for a seat in the Massachusetts Senate.  I know from working closely with Jo that she has the perfect qualities to be an exceptional State Senator.  To begin with, Jo has shown an absolute commitment to making the voices of the forgotten heard during her two decades of leadership in progressive organizations at the local, state and national levels. But equally importantly, Jo has shown that she has the ability to build the coalitions and bridges necessary to effectuate meaningful change.

I first met Jo in 2012, when I reviewed A People’s Guide to the Federal Budget, a book that Jo’s organization, National Priorities Project published to make sure that ordinary people could understand the way government and, more particularly, the U.S. budget works. We started working together more closely when Jo joined MoveOn. There I collaborated with her on a number of campaigns and initiatives, focused on the Affordable Care Act, immigrant rights, winning a $15 minimum wage, criminal justice, and more.

From my many years in government, I know that progressive values alone are not enough to effectuate change. Good policy only comes to fruition through the efforts of experienced, principled and savvy leaders. Jo is one of those special people. That is why I strongly endorse Jo Comerford for the Hampshire, Franklin, Worcester State Senate seat. 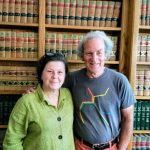 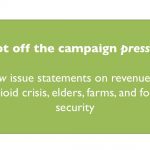 On revenue, the opioid crisis, elders, farms, and food securityCampaign