Here’s my statement in response to the U.S. Supreme Court decision to uphold Donald Trump’s Muslim Ban. The image above is from a piece of work I helped organize at MoveOn with my amazing colleague, Iram Ali and our team, in the early days after Trump’s election. I’m grateful to Iram and MoveOn for continuing to stand strong.

“History will judge people of conscience by what we do in the wake of the Supreme Court decision to uphold Donald Trump’s racist and xenophobic Muslim Ban.

“The conservative Supreme Court majority may not have the wisdom necessary to stand up to Trump’s state-supported bigotry, but the people can and must.

“Trump’s ban is a shameful attack on cherished values of freedom, liberty, and religious tolerance.

“Today’s news adds even greater urgency in Massachusetts for our legislature to pass provisions of the Safe Communities Act, which among other protections, would withdraw state support for a Muslim registry.

“We must say together, in Massachusetts: We stand with Muslims. There is absolutely no place for hate in the Commonwealth.” 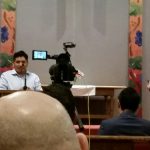 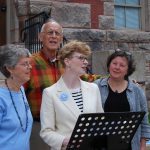